Will Obama Sanction a Policy on Transgender Military Service that's at Odds with Science? 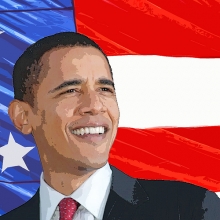 Secretary of Defense Chuck Hagel said Sunday that the ban on transgender service members should be “reviewed” and that “every qualified American who wants to serve our country should have an opportunity” to do so. Although military spokespeople havesaid before that the policy is regularly under review, the remarks by the Pentagon chief, in which he said he was “open” to reassessing the policy and reiterated that service members should be judged by their performance abilities, appear to signal a new level of commitment to reconsidering the trans ban.

The question is how long this will take, what the review will find, and what force will ensure that it really happens, so that each Pentagon leader doesn’t just run out the clock, locking in the status quo.

The most obvious answer to this last question is a force who has been oddly absent: the commander in chief. President Barack Obama has said nothing about his position on the transgender ban, although he was eager to tout the repeal of “Don’t Ask, Don’t Tell” as one of his important accomplishments. When asked by the Washington Blade whether the president would direct the Pentagon to end the trans ban, White House Press Secretary Jay Carney punted, saying, “I don’t have anything on that. I’ll have to direct you to the Pentagon at this point.”

It may seem reasonable, at first blush, for the president to avoid weighing in on a touchy cultural issue at this point in his tenure. His second term is floundering, and it could open him up to criticism if he seems to be taking on small-bore social issues while the economy and world events appear to spiral out of control.

But that assessment is incomplete. For starters, transgender equality may seem like a small-bore issue, (though not, obviously, to transgender people); but with literally no reason beyond prejudice to let transgender Americans suffer in silence as they honorably defend out nation, it’s increasingly becoming a blemish on the president’s record, and on our country’s soul, to do nothing.

What’s made this point so obvious in recent weeks is the utterly silly talking points the Pentagon has adopted in response to an expert report co-authored by a former surgeon general, finding that “there is no compelling medical reason for the ban.” (The report was sponsored by the Palm Center, where I am a consultant.) Since the report’s release in March, the Pentagon has been churning out robotic responses to press inquiries on the policy, murmuring meaningless meanderings about the “austere environments” of military life that could make some medical care difficult to access.

Never mind that the military already supplies complex medical care in the field—equally or more burdensome than what many transgender people require—to tens of thousands of service members, including to those who require the very same medications that are said to disqualify trans members. Never mind that there are already an estimated 15,000 transgender people serving in uniform and that the ban just makes it harder for them to access the care they need since they can’t come out. And never mind that the recent report estimated that the number of service members likely to have medical complications from gender-confirming surgery if the ban were lifted is a whopping 10.

Hagel’s remarks on Sunday, though offering an opening for review, continued to echo the robotic Pentagon talking points that consist of vague and groundless assertions. This is a medical issue. Austere locations are involved. Adequate health care may not be available.We may hope that the Pentagon really does review the policy in a timely manner, and that when it does, it will quickly come to see that this is not, in fact, a medical issue, any more than simply operating any large institution is a medical issue.

But ultimately it’s the job of the strangely silent president to push this issue forward. President Obama has made it crystal clear that he wants a nation that listens to scientific consensus on critical policy issues. Yet his Pentagon chief is parroting platitudes about trans service that are profoundly unscientific. The president is responsible for whether his administration speaks—and acts—on the basis of science. He should tell his country where he stands on transgender service and explain how he reconciles the continuation of a bad policy that he controls with a medical and scientific consensus that has determined that it’s time for it to go.