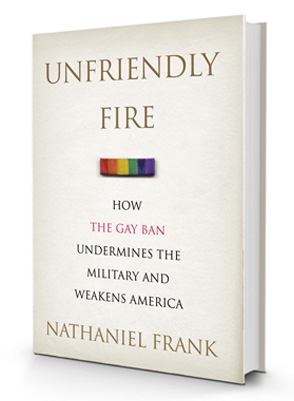 Unfriendly Fire: How the Gay Ban Undermines the Military and Weakens America has been recognized as that rare book that helped change powerful minds, contributing to better public policy and improved lives. The book used extensive scholarship, human stories and an aggressive messaging strategy to inject facts and faces into a discussion where there had been much heat and too little light. It was widely read by opinion leaders and policymakers, including Pentagon officials charged with reporting on how the military could lift the gay ban. Unfriendly Fire also served as the blueprint for two successful Constitutional challenges to “don’t ask, don’t tell” in federal courts (in which Frank testified), helping pave the way for the ban’s demise.

“With this book, President Obama, who pledged to scrap don’t ask, don’t tell, has an instruction manual, as well as a blooper reel for avoiding Clinton’s mistakes. Unfriendly Fire reads like a crisp, confident, tightly focused legal brief appealing an unconscionable decision; pity the opposing advocate who must answer it point by point.”

“Frank's lucid and timely book should put to rest any lingering doubt about whether ‘don't ask, don't tell’ is working — it's been a failure from day one and should finally be put behind us.”

“Frank’s methodology is scholarly: Thirty pages of footnotes. Ten years of study, visiting bases and academies. Reading thousands of pages and talking with hundreds of ‘officers and enlisted personnel, policy makers and scholars, government personnel and civilian advocates on both sides of the debate.’ Even with all that research and documentation, Unfriendly Fire is no textbook read. The Ph.D. writes without sounding academic, and the book is humanized with voices from all branches.”

“Empirical evidence and systematic analysis rarely have an impact on such emotional topics as gays in the military. But here is a book from a leading scholar that cuts through the ignorance, the denial and the prejudice to explain how we got stuck with a policy that was doomed to fail. Our military and our nation owe Frank a debt of gratitude.”

“The time has come to look beyond our preconceptions and focus on capabilities. Frank’s book should be mandatory reading for anyone with an interest in the state of our society or the readiness of our military.”

“This book lays out clearly, fairly, dispassionately and accurately the terrible cost to our national security of this insane policy. It brings light not heat to the debate - and the light makes change seem not just necessary but urgent.”

Andrew Sullivan
The Daily Dish, author, The Conservative Soul: How We Lost It, How To Get It Back.

“A sharp, vigorously framed analysis argued so discerningly, so substantively and so well. With agility and tough-mindedness, Mr. Frank brings hard evidence to bear on the gay ban’s cost and consequences.”

“By juxtaposing the latest scholarly research with extensive anecdotes, Frank puts a human face on the flaws in this policy, and it will hopefully shift the nation further towards the repeal of ‘don't ask, don't tell’”

“Nathaniel Frank makes a compelling and solid case for repealing ‘don’t ask, don’t tell.’ This scholar details how the sad and embarrassing law came about, how fear and prejudice carried the day and facts were kept in the closet or ignored. More importantly, Frank demonstrates how this misguided and costly law has failed our military and the American people. This is a valuable contribution and worthwhile reading for all who care about justice and equality.”

“Some members of Congress have recently suggested an ‘in-depth study’ of this issue. All they need to is read Frank’s meticulously reported book... to see that it has been studied to death.”

“Frank has written a fascinating account of the men and women, the motivations and the passions, surrounding the ‘don’t ask, don’t tell’ policy. Others have chronicled the efforts of advocates of gay service, but Frank delves into the minds, motivations and strategies of those who sought to maintain the ban, providing a compelling indictment of the merits of their position.”