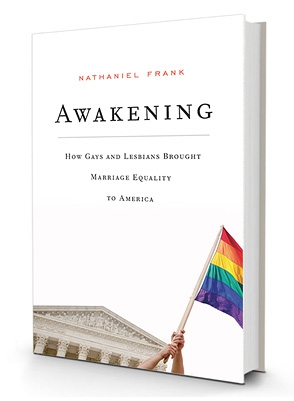 Awakening: How Gays and Lesbians Brought Marriage Equality to America (Belknap/Harvard, April 24, 2017) is the first full-scale history of the marriage equality movement in the United States, and places that movement into the broader history of two generations of LGBTQ activism. Drawing on scores of original interviews with key players in the marriage movement, the book takes readers on a sixty-year journey culminating with the thrilling conclusion at the Supreme Court, but will surprise even those who thought they knew the full story. The book also raises fundamental questions—and answers—about how the lessons of marriage equality apply to the current political moment.

"An excellent read and an important book on the marriage movement… Nathaniel Frank brings critical balance [and] insight to chronicling the long road to equality… exhaustively researched… fascinating reading."

"Even those steeped in the gay rights movement will find much to admire in the novelistic detail and scholarly erudition that distinguish this book."

"The much-needed definitive history of how gay people and gay lawyers fought for the right to marry and won… Full of key lessons for other social movements."

author of Sticks and Stones: Defeating the Culture of Bullying and Rediscovering the Power of Character and Empathy

"There’s no better account of this phenomenal social and legal movement than Frank's gripping narrative, rendered in fluid prose backed by deep research and thoughtful analysis."

author of Public Vows: A History of Marriage and the Nation

“A powerful, vastly rich and moving narrative, with a cast of thousands, stretching from the 1950s to the decision of the US Supreme Court in 2015 affirming the rights of same-sex couples to marry… there is a wonderfully soft pace to the book, a sense of momentum and of something momentous… gripping... a captivating read.”

A fascinating account of the modern battle for equality

"In our present climate of political uncertainty, Nathaniel Frank’s gripping history of the tenacity and determination of lesbian and gay people will serve as vital inspiration for whatever battles may lie ahead."

“With verve and a crisp, authoritative tone, the author sweeps readers through a history of civil rights campaigning in the 1970s, domestic partnership ordinances in the '80s, and the story of how AIDS and protest movements produced an unshakeable solidarity. Frank's strikingly detailed, essential reportage reminds readers of the gay community's enduring fight for equality.”

"Frank's latest book affirms his far-reaching expertise on the LGBTQ movement. The book is brimming with details of the 'countless incremental changes' and historical forces that shaped 'dramatic shifts in attitudes about same-sex love.' … a rewarding read."

"Frank gets it down and gets it right. He has clearly mastered every document, interviewed every principal, detailed every legal argument and given credit where it’s due. His book is the text from which other histories will be written, and the textbook from which future impact litigation and advocacy will be planned.”

“Many people think marriage was won overnight. This book proves it wasn’t… Frank covers its nuances better than anything else I’ve read… truly impressive… [an] indispensable account”

"An amazing story filled with compelling figures and many triumphs and setbacks. Frank tells the story masterfully in beautiful prose that made this book impossible to put down, even though I already knew the ending."